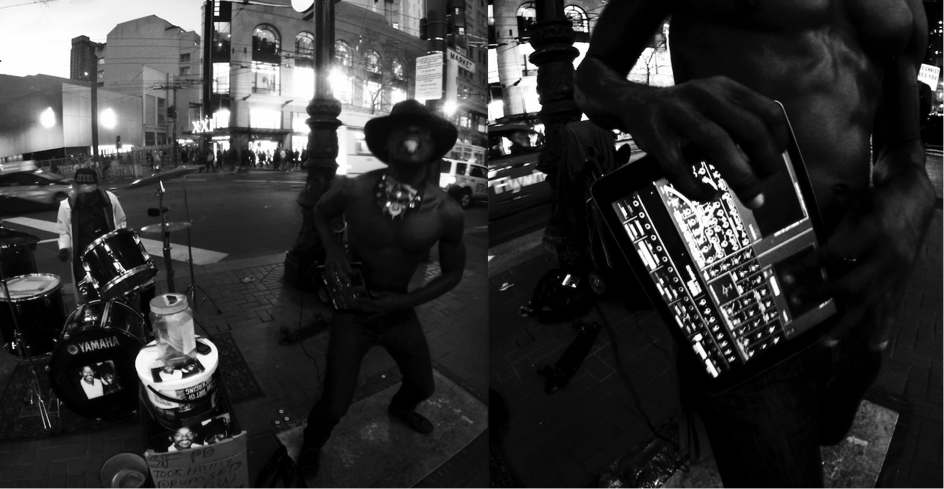 “So the red is for blood, the black is pretty obvious, for the people, and the green is for the land. This is the African American flag”

Manifesto XXI – Why did you choose to call the band Urban Funk Machine?

I was thinking of what to call my band and I thought: when people look at me, what do they see? Urban! What kind of music do I play? Funk! And then, I didn’t want to use the word Ipad. I said Machine! Urban Funk Machine! I told Kaïda and he loved it!

Yes, he’s in Japan right now. When I first met him three years ago, I didn’t like his drums. It was good but not for what I had in mind. One day he started to jam and I put my wood down, my tap shoes on, plugged my I pad up and it was magic! The first time we played together, someone dropped a lot of money and we thought we should do something with this. He has the drums, I can dance, I have this rock tech thing. Let’s put it all together and we did! People just kept paying us.

Manifesto XXI – This is interesting because you have this modern side with your Ipad, and you have this old-fashioned, traditional jazz tap dancing!

It’s rare to see someone using the Ipad as a main instrument. I had an appointment with a manager of Apple few years ago. He liked the concept. I said: “when does the sponsorship start?” And he goes “would you come here and teach it?” Because it was still new (it was six or eight years ago) I said I can’t teach it yet, I will teach later on but not right away. He didn’t want to do any deal. I think his idea was to steal it so it didn’t work out. I have to make money with it! For the Intel advertising, it was the same I had some conditions. We are in a world of competitive marketing…

Manifesto XXI – But it is a public software and you’re the only one to do that?

Yes because I know how to use it a certain way. The sounds that you get are mine. Go ahead and get it but you will not be able to do the same, I work with some tech friends of mine that are hackers. Once one of them said: “the technology isn’t doing it, that’s you!”

Manifesto XXI – This is quite the same with traditional instruments, everybody can get a guitar but not everybody can be able to be good at it!

(Laughing) Exactly! I am passionate by technology. I spent a lot of time at the library when I was little; I was fascinated with speakers, radios and transistors. I used to take my mother’s stereo equipment apart. My mom would go to work on Saturday morning, I have my soldering gun and screws all over the floor. My mother is like “IF YOU DON’T PUT THIS ON I’M GONNA KILL YOU!” Don’t panic I know what I’m doing!

So when the computer started coming out I just did the same thing! I wanted to see how everything works. Dance and technology started in my childhood!

Manifesto XXI – Did you learn to dance by yourself as well? Did you started to dance in the streets of Detroit where you grew up?

I didn’t learn how to tap until 32 even if I always loved dancing. I saw Savion Glover in 1998 in a movie, I wanted to do the same.

I used to have my 9 to 5 job in Detroit; I hated that. When you go on the morning it’s dark, when you come back it’s dark, I can’t do that again I’m going to be depressed! I wanted to leave and dance in the streets of SF and make a living with it. I remember I was talking to my friends about it, and they said, you will go out there with all these gay people in SF? (laughing) I didn’t know what they were talking about! I wanted to go that’s it!

When I just arrived in San Francisco I just got a piece of wood and my shoes on and started to dance in the BART station (métro de la ville). I just kept repeating the same step; people were giving money because they don’t really know about tap dancing (laughing).

One day this woman came by, she goes: “You look like you could use some help” – I was very surprise – “My dad is a tap dancer”. His name was Alford Robinson and he was eighty-years old, he’s been my tap teacher. I called him: I had to buy some Budweiser and go to see him in Oakland. He had all these jazz videos in his house. He told me he knew Savion Glover as a kid, Gregory Hines etc. I thought he was stretching the truth, I was listening and saying to myself he doesn’t know all these people, but then he started showing me pictures, holly shit, he knows all these people!

He said to me:

“I don’t want you to dance on Michael Jackson, no funky style. If I am gonna teach you it’s gonna be on jazz music.”

So he started to teach me in his kitchen while he was cooking dinner. And I said:

“You want to learn right? So do this!”

I could not do it!

I used to sing Ella Fitzgerald’s songs scating, singing my beats first and then I was doing it with my feet.

Mr. Robinson never told me I was good, he kept pushing me, he was killing me! One of his friends told me that he actually loved the way I danced but wanted me to get better and better. All these years until he died I was dancing on jazz music. He was teaching at Stanford University and when he died I taught there for a while.

He was really something, very educated. He would always tell me read read read about the culture. So I did and they are many things a lot of people doesn’t know about tap dancing. 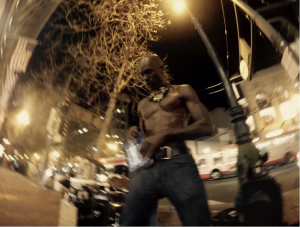 Manifesto XXI – What do we have to know?

It would take long to tell everything. The tap dancer has to know the bases but then no two tap dancers dance the same. We also have a relationship with Irish people; it’s kind of a friendly competition. Tap dancing goes with jazz music mostly. It came out with the Middle Passage, during the Atlantic slave trade.

During the slavery, African Americans were communicating playing drums and the slave master was like “I think they are communicating with each other thought this drum”. He took it away but if you study music and someone takes your instrument away, they can’t take your music knowledge away! You can just put your music knowledge into something else. So they did it with their feet! For me it’s the same, anything that I hear I can dance to it. It can be Polish, Italian music… For me it’s like breathing. 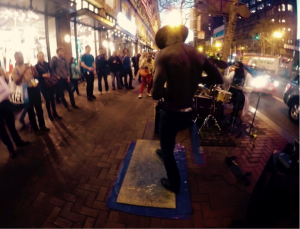 It was the arty and bohemian city in the United States, the city of the Summer of Love etc.

Manifesto XXI – Even before knowing how to dance, did you want to make it a living?

I am very determined and once I put my mind into something I know I can do it. I also saw things changing, particularly in Detroit, so I wanted to leave, two years before I left. For about a week after I came in California I didn’t sleep I was excited! I went to the City Hall, getting a mailbox service. I registered my business and I pay taxes, so when bad police officers argue with me, I have my business certificate, I pay taxes to the city, this is legal. I am here everyday at the same time so people are curious, the newspaper started to come around, the tourists started asking for the tap dancing guy. So now because tourists are asking for me, police have to leave me alone because it’s bringing money to the city. And nowadays with Internet we can also run our business in a none traditional way and be unknown. 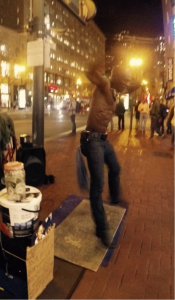 Manifesto XXI – You always knew you wanted to be an artist?

I always loved music and dancing. My dad (Martin Upshire) used to sing in The Contours, remember in Dirty Dancing “Do you love me”? So I understood about contracts and music, because he was always talking about that at home. My father didn’t understand my music, I wanted to create my own board and do electronic music. He wanted me to sing as he did, he didn’t understand the changes in this field. I was always talking about computers; I was hacking, doing coding.

I wanted to do something different from the classic rules of music: you have to write the music, 4 here, 4 here etc. Now all these rules are disappearing, people make music based on how they feel. I think traditional instrument will be more and more rare, or mixed with technology.

Manifesto XXI – Let’s say you become super famous; you would play on stage, would you continue to perform in the street? Because I think it’s a very different process!

Both, it’s the same I think.

Manifesto XXI – Do you have projects in mind for the future?

I’m working on MIDI tap shoes, electronic tap shoes. I have to build the board for the effects box and then all these sounds come out while I’m taping with my lighting tap shoes (yes you can also put lights on your tap shoes!)

I just use my taps as a drummer use his kick. And then I will probably start to sing too, my band want me to sing but we have to fix it.

For me it’s just showing to people what you can do when you put you mind on something. The technology is out there you just have to grab it.

We’re also going to leave the city. We want to go in Japan and Europe. I think American people are still kind of slow and because most Americans have egos, they say, “we know everything about technology”. San Francisco is not what it used to be. It used to be the city of art, diversity, now it is much more uptight and rich people. We will be in Japan in about two weeks and in Paris in June by the way!

Manifesto XXI – I can’t wait to see you in Paris man, it would change from the Edith Piaf singers with the accordion in Montmartre (Laughing)!

Oh I see what you mean! You will have to advise me some places where I can perform!

Thank you Edward, see you in the streets of Paris in June! Can’t wait!