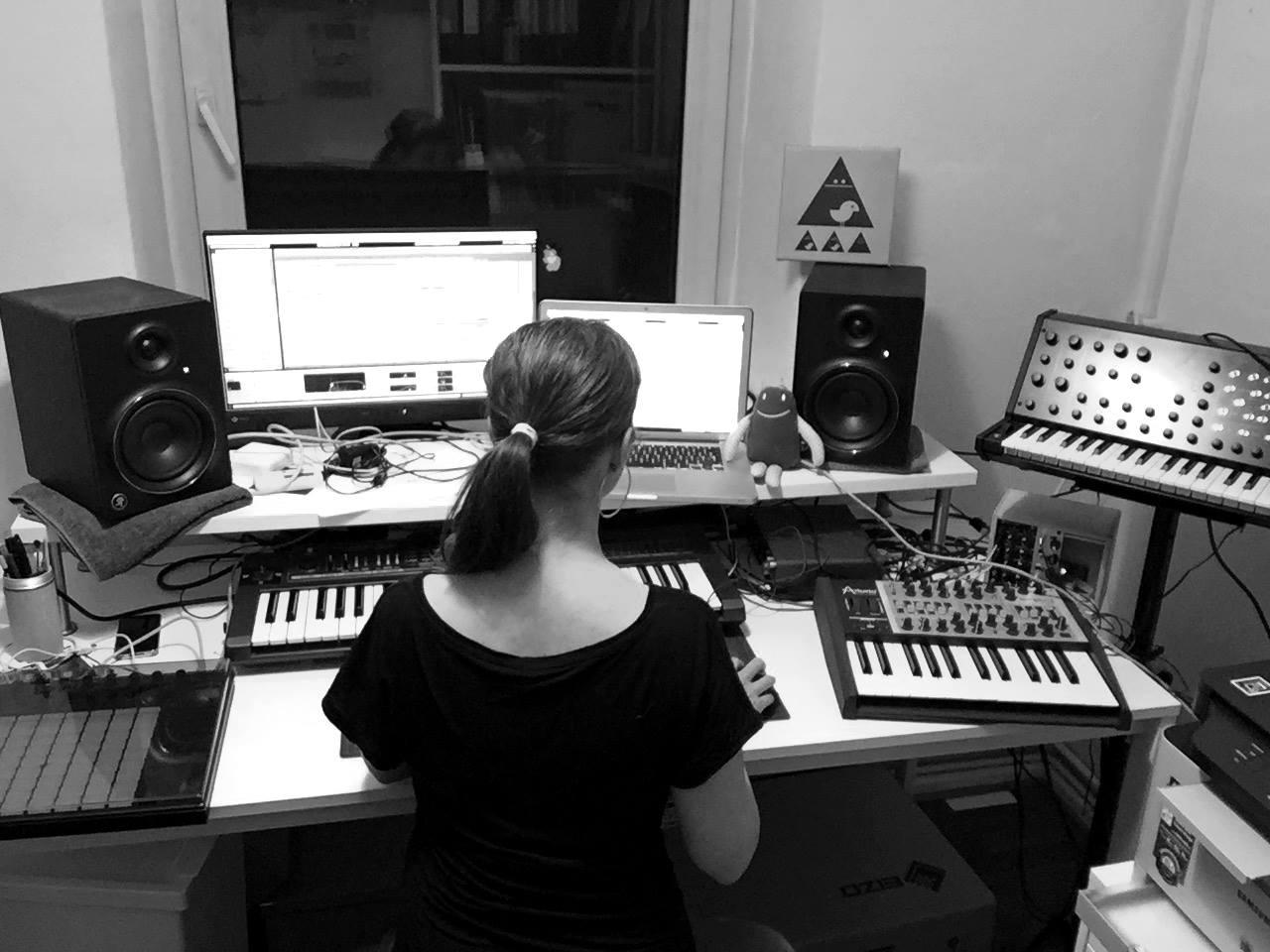 Manifesto XXI – How did you came to electronic music ? Are you coming from a classical music education ? Are you an autodidact ?

F.S. : I always had a lot of male friends that were musicians. But I never considered that could be something for me. There were no female role models. Too much technical geeky stuff. I learnt how to play the keyboard when I was a teenager but I think I forget almost everything. I always listened to music a lot. Cannot remember why but I actually started with a beat making app on my iPhone and move to the Native Instruments Maschine. After a while I noticed the limitations for arranging my tracks and started to learn Ableton Live. I attended a few workshops, watched tutorials on the internet, asked a lot of questions. And now I’m here and love to talk about geeky music production ! (smile)

Manifesto XXI – What stuff do you use to work ? Software, hardware… ? Which programs… ? Instruments… ? Field recording… ? Other…

F.S. : As I mentioned I use Ableton Live as my DAW and have a lot of plugins like: Komplete Ultimate, Soundtoys, Ozone Iris, Arturia V Collection to name a few. I also have some analogue gear like my Arturia Minibrute, Korg MS-20 Mini, the Volca series and my vintage Korg Poly 800 that looks like K.I.T.T. from Knight Rider and a DIY Moog Filter a friend built for me. But I must say it is way too much stuff to choose from. And it is really random what I choose to make music with. I use a lot of field recordings since I love to give my music a personal touch and layered deepness. It is fun to find sounds and collecting them and creating a beat or atmosphere from it.

Manifesto XXI – What are your influences, your artistic world of references ? (music but also cinema, fine arts, literature, fashion…)

F.S. : I really love Burial for his dark atmospheres, Lorn for his beats, Eomac for his sound design and rhythms, Moderat and many more. Design wise I’m inspired by dutch design and Bauhaus design and everything that catches my eye could be a poster or design of a packaging.

Manifesto XXI – As you are quite involved in visual arts, when you compose your music, do you rely on mental images ? Are you trying to create sort of « soundscapes » ?

F.S. : That is what would come to one’s mind. But no, I just try to create a feeling I want to get from my music, maybe sounds and harmonies I liked when I was a teenager. It is more a soundtrack of my life. But the process of making music is like painting a picture that is moving. That makes it very difficult. And I think by the time the track is finished I will have heard it approximately a million times so have my neighbours !

Manifesto XXI – If I’m right, you were born in Berlin, and still currently living there ; what do you think about the electronic music sphere there at the moment ? (people, music, styles, atmosphere, clubs, energy…)

F.S. : Yes I was born in Berlin in the former Berlin (West) and I’m now living in the eastern part in Prenzlauer Berg. Everybody is making music in Berlin. That is not something special here. Some important music software companies have their headquarters here like : Ableton, Native Instruments, Sugarbytes, U-he and Bitwig. You also have all kinds of cultural events. A lot is going on and you constantly have to live with the fear of missing out. People from all over the world are living here because it is cheaper compared to other big cities and that is very attractive for all kinds of creative people especially musicians. You can easily get lost in all the possibilities here if you don’t really know what you want to achieve and you constantly work hard for it. Since I’m not a party girl anymore I’m not really influenced by any party scene. I sometimes go to concerts of friends but I enjoy being at home and compose my music in my bedroom studio or listen to music in my shop and play it to the costumers. People that come from other cities often describe Berlin as dark and kind of fucked up and some get sucked into the vortex of party and drugs. Because the city is my hometown I see it in a different light. I would not want to live anywhere else. I love Berlin for being unfinished and ever-changing.

F.S. : The process always differs. I sometimes have a field recording that is very interesting, a sound I created with my synths or I just try to challenge myself by creating a tricky beat pattern. I like to granulate the sounds and pitch them down. I often get the best ideas when I don’t have the pressure to create something, just fooling around with no intention or trying to learn something new. I’m usually working on at least 3 tracks at the same time in order to not get stuck. If I don’t know how to proceed with the current track I’m working on another track. That keeps me going. The track is like a collage I have to add stuff here and there until I feel it is finished. I’m seeking after complexity, darkness and depth that is why I think that the track has to grow and therefore it needs time.

Manifesto XXI – For me, there is something worrying, dark, industrial, cold and strange in your music, is it a reflection of a personal anxiety, or maybe the one of the environment you’re living in, or even the way you perceive the world at the moment ? Is it a medium to exorcise bad feelings ? Or maybe just an artistic taste ?

F.S. : I don’t perceive my music as very dark. I would describe it as melancholic. I always try to put a hard Hip-Hop or D’n’B beat against a melancholic melody. I like contradictions. I’m an emphatic person and I absorb the darkness that surrounds me that could be stuff friends or I experience, things happen in our world today and maybe that is a way I cope with that. My music actually gives me happy feelings. Does that sound strange? (smile) It is great that I get found by people who can relate to my music via the internet. I get so many positive reactions. I think that people can hear that my music is very personal.

Manifesto XXI – You just released your EP « Spectrum » on Bon Temps Records, how would you describe this EP and the artistic intention behind it ?

F.S. : The EP was kind of a diary for me. I collected these tracks and sounds throughout the last year. It reflects the feelings at this time. I struggled a lot with my own expectations and with my feelings of failure. The EP shows the spectrum of my emotions. I sometimes felt very alone because nobody could help me with finding my own voice.

Manifesto XXI – How did you came to work with Bon Temps Records ?

F.S. : I met Jocelyn the owner of Bon Temps two years ago in my shop. I have my own graphic shirt brand SILBERFISCHER. He liked the music I played there and came the next day and brought his CD of his band , The Name, for me to listen to. I told him that I also had started to make electronic music. We connected on Soundcloud and later he commented on my track Sad Postcard that he wanted it to have it for the first Bon Temps collection. He watched my progress a while and said : « We want to make an EP with you ». I was very excited. They gave me total creative freedom which is very important for me.

Manifesto XXI – I saw that you’re also a fashion designer, how did you come to that ?

F.S. : I studied communication design in Berlin and before that I worked as a HTML programmer and in some graphic design studios and was kind of fed up working for someone else. I knew that I wanted to work for my own company. So I decided to put my graphic on shirts, founded SILBERFISCHER in 2004 together with my husband and we opened our own shop in 2006 (SILBERFISCHER’s HOMESHOP) and now we also sell our clothes online (www.silberfischer.com).

Manifesto XXI – Is there a link for you between what you compose and draw ?

F.S. : Since it comes from the same crazy mind there has to be one. (smile) I think my music is way darker and less mainstream than my graphic designs but I always try to challenge the consumer to look a little bit deeper and I hide stuff so that there is room to explore or experience things differently.

Manifesto XXI – How would you describe your aesthetic/style in general ? (both for music and drawing if you see a parallel between the two).

Manifesto XXI – Musically, what are your next projects ? Album maybe ? Other releases ? Videos… ?

F.S. : I’m currently working on a collab. It is a challenge to produce a track together not knowing each other and not being at the same place. This is a project with a more experimental approach. I personally need my creative freedom for my music. I just want to explore new sounds and rhythms and have the feeling I have to dive even deeper. There is still so much to learn. I don’t think in albums or EPs because this is a fun driven project but here are some labels that want to work with me. We will see ! (smile)

Manifesto XXI – Have you ever thought about creating music for the cinema? Did you already experience it for some projects?

F.S. : Yes actually I hear that a lot. At the moment I want to work independently and be in total control of everything. But if someone wants to use my music for a movie, just get in contact with me ! (smile)

Manifesto XXI – What are your next gigs?